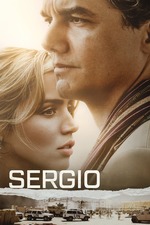 Top UN diplomat Sergio Vieira de Mello is on a tense mission which goes horribly wrong from a terrorist bombing.

Excellent true story source material with a narrative that relies all too much on flashbacks. We start relatively near a bombed out structure and then go back to how he met the love of his life Caroline. Sergio was quite the UN diplomat, very well respected, and the target of the early beginnings of what is ISIS in 2020.

I really tried to get into this story, but the way it was told just kept pulling me out. Flashbacks are pacing problems if handled poorly. Here, despite very fine acting, it is too much. Would have been better to tell a more linear story. The most recent Little Women was a masterclass in handling flashbacks creatively. Writers and directors should visit that as a template or, perhaps better, just tell a more linear story. I can't recommend this film based on how it was told, which is a shame, because there were parts that I really enjoyed and the effort was there.