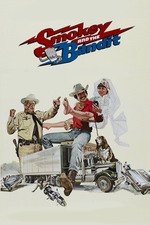 Jackie Gleason shines hilariously as Sheriff Bufford T. Justice chasing down The Bandit (Burt Reynolds in arguably his most iconic role) as he tries to escort a semi-truck load of Coors beer illegally across state lines to win a bet. The Bandit is joined by Connie (Sally Field) who is running out on her wedding day from the Sheriff's son "Junior."

Gleason is best known for his long stint on The Honeymooners TV show, but he plays one of the funniest sheriffs ever captured on film in this swift paced comedy gem. It's also a sweet romance with plenty of sparks flying between Field and Reynolds who were in a real offscreen romance at the time of filming and for a few other films. The soundtrack is solid, too, with some very catchy tunes by Jerry Reid (who also stars as The Snowman), "Eastbound and down ... load 'em up and truck it ...."

If you're looking for a fun trucker's movie, you need to check this out.

Some of the comedy is a bit cheesy, and has staled a bit with age and it becomes repetitive a few times. Still, it's a lot of fun to watch, even if only to enjoy and appreciate Gleason's riotous character take. Recommended.