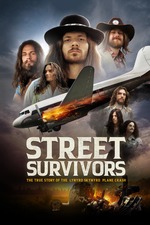 Narrated in person throughout the film by Artimus Pyle, the second original drummer for the band Lynyrd Skynyrd replacing Bob Burns, who played on the amazing first two albums, this covers the time before the fateful crash on October 20, 1977. The plane ran short of gas, an engine blows out and he plane goes down.

There is a considerable amount of foreshadowing. Ronnie Van Zant, the legendary singer, told Pyle he would die before he was 30. The plane has "blowback" issues where fire comes out of the engine in other flights. It's enough to make viewers wonder how or why such a successful band was flying in such a death trap.

On the day of the flight when the run out of gas and both engines die, they fly into a field with trees clipping the bottom of the plane. It's a truly harrowing scene as the plane is just ripped and mangled by the trees, left in pieces. Somehow, amazingly, there are 20 survivors, including Artimus Pyle, but Van Zant, guitarist Steve Gaines and his sister Cassie Gaines, the assistant road manager and both pilots were killed.

Pyle was sued by the surviving members of the crash and family members to try and prevent the film from being made. Apparently a blood oath had been made not to use the band's name to publicize the events of the tragedy. Pyle wrote a book about the crash as well and that was part of the suit.

The atmosphere in the movie is somber, matching the mood, including the music which at times is actually understated. I would have liked to have heard more Skynyrd songs played, but clearing the rights for those songs with the surrounding legal issues probably wasn't going to happen.

If you're familiar with the written accounts of what happened the day of the crash, you probably don't need to see this movie, but one could have said the same thing about Titanic -- we all knew what happened to that ship, and yet there was the story of Rose (fictional as it was, this story is true). What's new here, at least to me, a fan of Skynyrd's music, is Pyle's individual journey. How he got into the band, his time playing with them and what happened to him as part of that crash.

The crash and aftermath scenes are handled well. Pyle's heroic efforts to get help to his hurt, dying friends are incredible, almost unbelievable. The place where the plane went down was swamp country so getting a rescue team near was challenging.

I bought the HD version of this film for $8.99 through Google Play on July 4, 2020. If you're a diehard fan of Skynyrd, maybe it's something to add to your collection, others can either wait for it to appear on one of the streaming channels or rent it. I liked it, but again wish there were more Skynyrd music to supplement the story. Instead, it's a bit like a low budget made for TV movie.

I mean, how do you make a Skynyrd movie that doesn't include, much less end, with "Free Bird"?!?!

Maybe someday the band will formally endorse a movie of all that was Skynyrd including this pivotal moment in their history. I think Pyle wanted to get the story made to tell his part of the story, but it's too bad it didn't have the full band's support. It does hurt the overall film, somewhat. It's a fan recommend only, just to hear what one former member went through. Not sure how many times or even if I'll ever rewatch it.