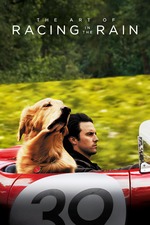 Based on the bestselling novel by Garth Stein, this one delivers the drama. If you have a penchant for dogs, racing and love, then hurry out to the theaters before it's gone or catch it on streaming.

I didn't get super emotional watching movies until my late 30s, early 40s, but now that I'm in my 50s, these kind of movies almost too easily tear me up. I mean, you've got dogs, which literally are man's best friend and nobody with a heart wants to see anything bad happen to a dog. This movie isn't Old Yeller but it starts out with a dog essentially narrating his day that he knows he's near old age death. Luckily, the movie goes back in time and we don't stay here too long. It's a jarring way for the viewer to start the first 10 minutes of film.

Why do dogs not live longer? That goes beyond the theme of the movie, it's just me wondering aloud how unfair it is in life that dogs only live about 1/10th the time of a very healthy human being.

My wife would have liked this movie a lot, I think. It's a great story, despite having familiar subplots. The race car driver who excels at driving in the rain is an interesting angle, but the rest of what happens has happened in other dog movies.

I don't want to spoil anything more, suffice to say, bring something to wipe tears on this one. It's the best movie in the theater I've seen since signing up for the Regal Unlimited plan in August 2019.

Flaws? I didn't particularly care for the dog owner's voice: a raspy old sounding Kevin Costner just didn't fit Enzo the dog to me. Too bad Robin Williams wasn't still alive, he would have been a better dog voice, or maybe Eddie Murphy (yeah, he is the donkey in Shrek)

The acting is good, particularly Amanda Seyfried (she is getting on my radar of actresses to watch), there is engaging drama, tension, conflict and most of the story setting is in Seattle. Recognized all sorts of familiar places. All makes for a movie I want to take my wife to see so she can enjoy too. Highly recommended, especially if you're a dog film lover.