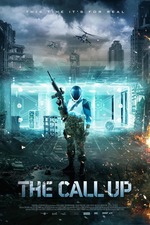 A group of gamers are invited to try out this super realistic virtual reality game that -- unsurprisingly -- turns out to be real. This movie could have benefited from the 1917 one continuous shot technique for over the shoulder Call of Duty type gaming perspective.

It's a serviceable movie, but not that entertaining because the story is pretty bland and the characterization is almost non-existent. Might as well have been a group of random strangers. The game is real plot has been done (to death, pun intended) before. It would have been better if there were more power-ups around the game for the players to pick up.

The whole med pack injection to heal wounds and give back the armor is a bit weird. Healing? Yes, but how does it grow back virtual armor? Guess that's just one of the puzzling parts. Overall, it's just kind of a mediocre effort. Not recommended.