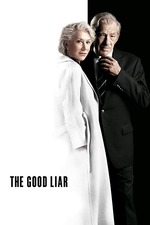 Helen Mirren plays an elderly woman, Betty, who meets Ray (Ian Mckellan) through online dating. The viewer quickly realizes Ray is scheming to bilk Betty out of her money, but that is just one of many onion layers in this twisting, turning drama.

Can't say any more about the plot without spoiling, so stopping with that basic description.

What I like about stories like this are how it makes the viewer start to guess ahead plot-wise what is going to happen, like a good mystery does. I suspected the storytellers were going to trick me. It's a bit of a cat and mouse game with the viewer. These films are fun to watch, as long as the plot remains coherent and believable. For the most part, that isn't a problem here.

This is a film where many lies are exchanged. Not only between the Ray and his victims, but between the viewer and the storyteller. If you like films that make you think one way, but then twist you around another, this movie is for you.

Took away a star in the rating was a common complaint I have with many movies these days: there are repeating setup screens or scenes which have no value to the overall plot.

The length of this film could have been edited down by at least 20 minutes, maybe 30. The runtime is 109 minutes and that's not terrible, but this story could have been told in 75 -90 minutes so much tighter and more taut. There will likely be people that say it is "slow" but i don't consider this a thriller, it's more of a dramatic mystery.

Based on the novel by Nicholas Searle, which I haven't read and thus have no idea how faithful the adaptation was to the original source material. Regardless, I really enjoyed this one. Recommended.