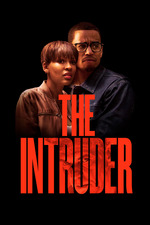 Dennis Quaid as Charlie a quirky neighbor moving who has an overly sentimental obsession with "his" house, even after it's sold to a new couple. Annie (Meagan Good) is sympathetic and Scott (Michael Ealy) is suspicious of how much Charlie just keeps hanging around after he has supposedly moved on.

This is one of those slow boil psychological thrillers, in the vein of The Fan. We wonder what is the deal with Charlie? Is this guy unhinged, a little weird, what's up with him? That is the draw that swirls us closer to the drain. The first act is innocence, the second suspicion, and the third goes off.

It was likable enough, although it was a bit paint by the numbers story-wise, very predictable in parts. The acting, sound, cinematography is OK. Entertaining, but sort of average and forgettable. Recommended, barely.