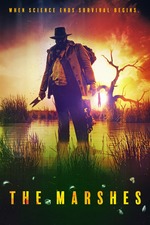 Three biologists enter a marsh area for scientific study and encounter a very malevolent character sporting an Indiana Jones style hat. He stalks these biologists, hellbent on gutting and hanging them like fish. To this creature, the humans are just another animal in the marsh.

Brutal, unapologetic and not for the faint of heart. Expect to see some really graphic kill scenes. If that's not your bag, steer wide away from this horror movie. This is no horror comedy, this is going for the jugular. I like intensity, but found the movie to be nothing special. Sort of seems inspired by Texas Chainsaw Massacre in the marsh. Not as good as Texas, but seems heavily influenced.

There isn't a lot of explanation for what is happening or why, it just happens. Those who like to understand at least a little bit what's going on might also be disappointed.

Going to just give this an OK rating and not recommend. I've seen a lot worse and better horror films. I do appreciate that this was played for pure shock and awe. Those who prefer that type of horror should give this a try and see if this comes across a little more favorable than it did for me.