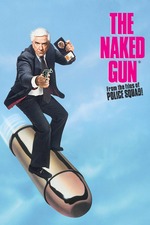 The Naked Gun: From the Files of Police…

If you are a fan of Airplane! this police spoof starring Leslie Nielson as bumbling Detective Frank Drebin and is by the same team, namely David Zucker and Jim Abrahams. It lampoons James Bond films, hard detective, police potboilers and more. The plot is ridiculous, but the point is to make you laugh. And you will, again and again.

An ironic role for OJ Simpson as Officer Nordbert considering his real life drama seven years later, but he's hilarious as the guy who is getting repeatedly injured "by accident." An early scene with the wet paint, the smashed hand in the window, the hot furnace and the bear trap makes me laugh every time.

From beginning to end this pays off. The baseball game scenes might be some of the funniest on screen scenes I've ever seen. Laughed so hard there were tears in my eyes. This comes up a little short, hence the half-star takeaway, due to some slow and mostly silly parts with Priscilla Presley as Drebin's love interest (we didn't need a romance sandwiched into this zany story). She is a knockout here for sure, though. The fantastic, albeit sometimes over dramatic Ricardo Montalban plays the perfect villain ("Khan!!!!!!!"). I'm jealous of all those who haven't seen this very watchable and rewatchable movie. Highly recommended.