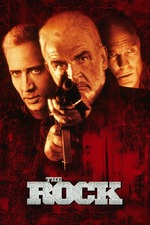 Have rewatched this several times since it came out in 1996. Might be my most favorite movie directed by Michael Bay. A long list of stars including Sean Connery, Ed Harris, a not too unhinged Nicolas Cage, Ed Harris, Michael Bien (Terminator!).

The plot is seductive: Ed Harris is a military commander gone rogue with a bunch of nerve gas holed up on Alcatraz. Connery is sprung from prison as the only man known to have escaped from Alcatraz to advise the Seal team going into Alcatraz. Cage's character is the chemical expert who knows how to deal with the horrible gas.

What makes this standout is that Michael Bay plays it (a little) more conventionally, telling a great script with minimal distracting camera effects and unnecessary creative shots. Imagine that, play it not too avant garde and it works good. I'm all for creativity, just don't overdo it and make the creative camerawork and special effects wizardry more important than telling an entertaining story. Not a problem here, yay!

The ending is not predictable which makes this movie even better. Weaknesses? Cage has a couple of his trademark "I look like I'm severely constipated" attacks. This overdramatic active is jarring at times. Connery makes up for Cage going over the top a few times. Recommended