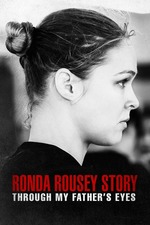 The Ronda Rousey Story: Through My Father's Eyes

Follows through the beginning of Ronda Rousey's mixed martial arts career as an amateur, becoming pro and ultimately becoming the champion of the world. It also delves into her deep love of family, particularly her father who I didn't realize had committed suicide after breaking his back and realizing he'd be a paraplegic for the rest of his life.

This documentary does the back and forth style a little too much. We see the director Gary Stretch interviewing Ronda, then we continue the chronological narrative. I wish it would have been pieced together completely chronologically. It took me out of the story too much, which I liked in order. The interview portions in the future reminded me that there was a clever editing hand behind the story. The documentary also stops short of history, failing to acknowledge anything that she's currently doing in world wide wrestling or acknowledging her final mixed martial arts fight. Rousey's gritty, tough story gets 4.5/5 but the way this was told knocks this back to a 3-star affair for me. Recommended.