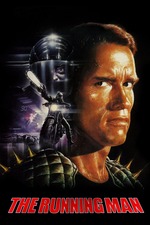 As far as cool Stephen King (writing under the pen name of Richard Bachman) story adaptions and directed by Starsky (Paul Michael Glaser) and starring none other than Arnold, this one is more sci-fi action than horror.

In the future prisoners are put on a game show called The Running Man and are hunted down by network stalkers. Also starring Richard Dawson, a real game show host playing a fictional and significantly more psychotic game show host.

This is in my Stephen King top 10 adaptions list. If you like action movies with grim future backdrops, check this out.