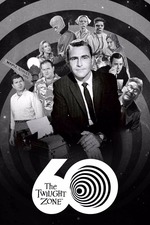 Fathom events 60th Anniversary special seeing the original Twilight Zone on the big screen for the very first time ever. It included six classic episodes: "Walking Distance", "Time Enough To Last" (Burgess Meredith glasses episode), "The Invaders", "To Serve Man" (It's a cookbook!), "Eye of the Beholder" and "The Monsters are Due On Maple Street"

Each episode included the original TV week before teaser introduction by Serling, which are kind of rare and were not included in several of the box sets of the series, so bonus there. The digitally restored versions looked great on the screen. Sound was amazing and it was a great experience.

After the episodes all played, there was a documentary on Rod Serling's life that had some interesting clips of people who knew Serling, including his daughter Jodi, telling stories. Also had some footage of Serling at Ithaca College. I've seen a lot of this footage before ,but it was edited into this documentary well.

Overall this was a lot of fun and a great experience. I took away a star because I would have chosen three or four other episodes to showcase the strength of the show and there was some extraneous ads for CBS at the end of each episode repeated too much. It's important to show the end credits for each episode, but they could have edited out the CBS ads.