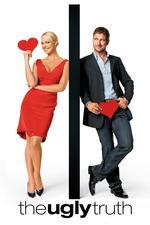 Katherine Heigl plays Abby Richter, a TV producer with sagging ratings and Mike Chadwick (Gerard Butler) is the man telling the brutal, chauvinistic truth in a show called The Ugly Truth about relationships with the opposite sex. Abby, irritated by Mike's comments calls into his show to complain. The next day Abby learns in horror that Mike has been hired to help her network show improve ratings.

There is decent chemistry between Butler and Heigl and although the story is somewhat predictable, it works well enough to keep the viewer engaged. The comedy is more subdued and situational. If you like rom coms with some playful dramatic tension, this is worth checking out. It didn't blow me away, but it was fun. As a rewatch for our February 2020 viewing challenge, it's an above average film to kick off the event.