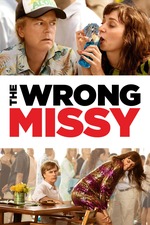 David Spade plays a man who goes on two blind dates with different women both with the first name of Missy. One is the beautiful and cliched perfect Molly Sims character and the other is the nightmare, uncouth but still reasonably good looking Lauren Lapkus.

Spade isn't aging well. Let's be honest, how many of us do, but he just looks very lethargic and his snappy one liners are missing the 'n' and more like sappy and crappy. Lapkus who I'm not that familiar with is the star performer in this film. Her comedy and timing for the intentionally over the top psycho new girlfriend scenes are at times very funny.

Adam Sandler's wife, Jackie, has some cringe-worthy acting as a character named, stay with me, Barracuda. She delivers lines like she's reading them off a teleprompter. This all reminds me just how much we miss Chris Farley to make David Spade more funny than he is. Great straight comic with trademarked acerbic wit, but he's just laughably bad here.

Lapkus saves the day and is the only reason to watch this movie. I get the sense that she improvised a lot of her lines, because her performance has that sort of spontaneity. I'm going to recommend this for her performance. She's makes watching this movie from simply tolerable to entertaining. Its a very high 2+ star movie that I'm rounding to barely 3 stars.