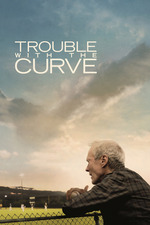 Trouble with the Curve

Clint Eastwood as aging baseball scout Gus Lobel in a movie that is the opposite story as Moneyball. Eastwood skillfully plays an old man who seems to be past his prime scouting a final make or break talent for the Atlanta Braves. His daughter, Mickey, played by Amy Adams is a lawyer trying to make her mark at a prestigious firm is steered into helping her dad properly scout the talent. Justin Timberlake plays a rival scout. I'm so not a fan of Timberlake as an actor, but he's OK here.

This is more a father-daughter drama than a baseball movie, but there's just enough baseball woven in to keep me interested. The ending to me his the homerun. There are better baseball and Clint Eastwood movies, but I watch this from time to time again, if only to enjoy the sweet ending. Recommended primarily for baseball and drama fans, if you aren't into either you might want to pass.