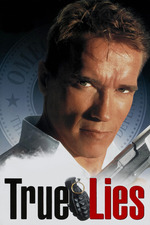 Harry Tasker (Arnold Schwarzenegger) plays an undercover spy. His wife, played by Jamie Lee Curtis, is unaware of his secret life until she gets mixed up in it.

Screenplay and directed by James Cameron, this will appeal to action fans with a bevy of great stunts, some of Arnold's best acting (seriously), and a fun sidekick character played by Tom Arnold. The secret identity of mild-mannered Harry Tasker with his wife getting pulled into a mission raises the stakes and creates some very entertaining moments where Arnold's character needs to do more than just kill the bad guys. This isn't Terminator 2 or Aliens, but it's a solid film worthy of watching and rewatching. Recommended.