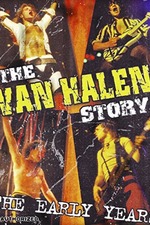 In recordings and on stage Van Halen is one of the loudest, proudest party rock bands of all time. After seeing news 10/13/2019 that Eddie Van Halen's throat cancer has come back (on TMZ, so no idea how accurate this is), I had to run down and watch a documentary on the history of the band. This one was on Amazon Prime Video streaming hit the spot.

The documentary goes through the history of the Van Halen brothers, including some of their earliest influences including Eric Clapton. Eddie started on the drums and Alex on guitar, but they switched instruments at some point and history was sealed. They landed David Lee Roth as their singer because he had a PA system they would rent when Eddie was singing. So, they just asked Dave to be in the band so they didn't have to pay for the PA. They picked up Michael Anthony from the band Snake, who had a PA and loaned it to them.

Van Halen made it by playing anywhere they could gig: backyards, parties, wherever. They started as Genesis, then Mammoth and finally their own surname. This led to the clubs where Gene Simmons caught them and that became a demo. Simmons couldn't get any interest despite the awesome early demo, so Van Halen went back to work hiring a manager and that demo made the rounds until Warner Brothers showed interest. The rest is history.

As far as documentaries go, this one checks all the boxes except that it ends when David Lee Roth leaves the band. Nothing on Sammy Hagar, Van Halen III with yet another singer and Roth's return with Eddie's son Wolfgang on bass. It is labeled "The Early Years" but a documentary that only tells the beginning and the Roth years misses a significant part of the band's history. I guess that will get covered in another documentary or future movie on the band (similar to what Motley Crue did on Netflix with The Dirt maybe?), but what this does with the early years is solid and very watchable. Not a lot of new tidbits for those familiar with the band, but good. I hope Eddie Van Halen beats the returning cancer, because the world is not as good without Van Halen rocking. Recommended.