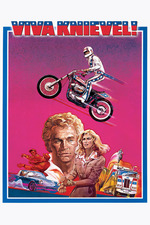 Evel Knievel the daredevil once starred in a movie. This one where he plays, guess what, a daredevil. I'm a huge fan of watching him jump and he was in some insane crashes, so a fictional movie about a daredevil with him playing seems like it has potential. The only problem is Evel the actor is pretty much only good when he's on the motorcycle popping wheelies and racing around, not speaking dialogue.

Is Knievel even doing all the stuntwork? The answer to that, according to Wikipedia, is no: "For the more dangerous motorcycle stunts, the producers hired the professional stuntman Gary Charles Davis. However, Davis' role in the production was kept under wraps to avoid questions about Knievel himself performing his own motorcycle stunts."

The title song is very catchy: "Viva! Viva Knievel!" It was made around the time of the old Wonder Woman and has that funky, rocking vibe. I like the theme song.

The plot of the movie seems mostly designed around having Evel Knievel ride around on his motorcycle in his red, white and blue leathers. I had to buy this movie (gasp!) in order to see it because it wasn't streaming anywhere. Is it horrible? No, but it's not good either unless you're a huge Evel Knievel fan and want to see a fictional movie about a motorcycle daredevil with Evel Knievel as the lead star. I think this was both Evel's first and last film that he acted in. Not recommended.