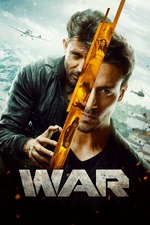 Indian action film, almost no English dialogue, so if you don't speak Hindu then expect to follow along with the subtitles quite a bit. I've never seen either of these action stars before either, but they are muscular and able to pull off some compelling martial arts fighting scenes. Add to that car chases and a Mission Impossible style agents on mission type of narrative, this movie is long, but entertaining.

There was an unexpected intermission somewhere in the middle. Even though it was long and I didn't speak the language, I had no difficulty following along with what was going on and was entertained. I wouldn't see this movie again, but it's recommended for action fans who speak Hindu and/or don't mind following the subtitles.