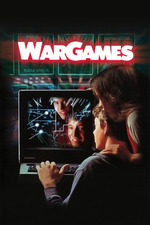 For those old enough to remember, at the time this movie came out (1983) there were serious tensions between the U.S and the Soviet Union AKA Russia (still are), computers were all the rage (still are) and there was a real threat of a nuclear war. If this movie is watched with this in mind, it amplifies the story.

Oh, and let's mix in a young Ally Sheedy as a friend/romantic interest and this is on. Would the military really let computers control the nuclear arsenal? Seriously? That is the plot of another movie, isn't it (Terminator anyone?).

Great movie, but admittedly time hasn't been its friend. Sheedy's best film work that I've seen and one of Broderick's high points. Dabney Coleman is good here too. My favorite side character is the cigar smoking General Beringer (Barry Corbin). That guy has all the best anti-technology lines. Recommended.