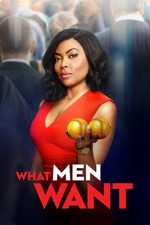 Ali Davis (Taraji P. Henson), a female sportsagent gains the power to hear only men's thoughts and she uses it to compete for a partnership. It's a Twilight Zone type story, which those who know me will recognize that's a soft spot.

While it dips a bit into the supernatural and morality pool, it also tries to be a comedy. It's not particularly funny when it could be funnier. The best laughs come courtesy of SNL's Tracy Morgan supporting character (and even his scenes at times are not funny). A lot funnier given the thoughts some men should have that she hears. Instead, male thoughts are reduced to mostly stereotypes.

Ali's gay assistant (Josh Brener) also has a love interest which is better characterized than most gay supporting roles so points for that.

There are a few other mostly silly subplots before we get to the ending, which you'll have to watch, if you want, to see -- no spoiler. This one is on the borderline of recommended and merely OK. I'm going to lean toward not recommended based on the ending.