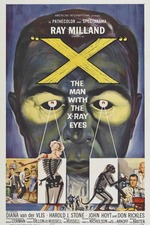 Stephen King first turned me onto this Roger Corman classic in his non-fiction film book: Danse Macabre. Ray Milland plays Doctor Xavier, who wants to experiment on himself to see what no other human being can see. Don Rickles has a bit part as a carnival barker.

The film opens with an extended shot of the human eyeball. Milland has a natural look with is eyes that is a bit unnatural, As he keeps using his special eye drops I cringed knowing the horror that was coming. What makes this movie so utterly and totally transfixing is the doctor doesn't stop when his vision gets better but has unusual side effects.

This is a bizarre sci-fi horror films. Released in the 60s, this must have just freaked out people everywhere. Stephen King described a twist of the original ending that Corman states never happened except in King's imagination. After watching the ending, do your research on this ending, because it will make the ending even more nightmarish.

What unsettles me most about this cult classic is that it first defined the subgenre of eye horror. It's not particularly graphic or bloody, it doesn't rely on gore or cheap special effects (although the cheap effects now seem quite dated) to shock the viewer, it just tells an increasingly disturbing story.

The budget for the film was less than $300,000 proving that you do not need to spend millions to make an entertaining movie. It won't be every viewer's cup of tea, but it works for me because of what the film does not show. It's all about a visual treat spurring your own imagination into the macabre.

They aren't many movies like this. Recommended for those who enjoy eye horror and have an imagination that extends beyond what is seen on the screen. You've been warned! Are there downsides? Of course. It's dated and looks like a movie from the 60s. For Corman fans, this and Death Race 2000 are must see.