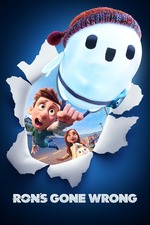 It's always very exciting when a brand new major animation studio comes into the scene in a big way, ready to show off to the world what they can do. Walt Disney Animation Studios may have been the king of animated films for nearly a century, but the 1990s was when they really started to have major competition, with both Pixar and DreamWorks arriving in a huge way with their animated films. This continued in the 2000s with Blue Sky(which was sadly shut down earlier this year) and Sony Pictures Animation, and in the 2010s with Illumination, and unsurprisingly, all of these studios have ended up becoming major juggernauts in their own right, and have produced many successful films under their belt. And the 2020s is already no exception as well, with up and coming British studio Locksmith Animation(which was founded by Aardman veterans Sarah Smith(who is also the film's director, along with former Pixar story artist and Aardman animator J.P. Vine) and Julie Lockhart) being one of the new studios to join the increasingly huge and strong line up of major animation studios. And although it had a very long road production wise, with a lengthy 7 year pre-production and production time, switching distributors twice(it was originally supposed to be distributed by Paramount under their Paramount Animation label, but once former CEO Brad Grey left the studio(and eventually passed away) in early 2017, Locksmith ended up taking the rights to 20th Century Fox, where they made a deal to release a new film every 12-18 months. Ron's Gone Wrong ended up becoming the only film in that deal that was released, because in late 2019, not long after Disney acquired Fox(and got the rights for Ron's Gone Wrong with them), Locksmith ended up making a new deal with WB, where their future films will be released under their WAG label. All future Locksmith films, starting with their next film, That Christmas, will be released by WB.), and several delays(most of which were caused by a certain pandemic that we all know about by now), their big debut film, Ron's Gone Wrong, finally ended up seeing the light of day, and has also introduced viewers to what Locksmith can do. It's admittedly a very flawed film, but Ron's Gone Wrong does more than enough right to make it a very pleasant little animated adventure.

The film's premise of a young boy named Barney(voiced by Jack Dylan Grazer) befriending a malfunctioning robot(or B-Bots, as the film calls them) named Ron(voiced by Zach Galafinakis) is certainly a premise that has been done plenty of times before, and Ron's Gone Wrong doesn't exactly do a lot to make it's premise fresh and interesting. The story is very predictable throughout, as not only do we know exactly what's going to happen to Barney and Ron throughout the film, but we also know that they don't start off as friends, but end up slowly bonding with each other, having a brief falling out but reconcile with each other not long later, and eventually having an unbreakable bond with each other. It's no doubt a very familiar story structure, and while it doesn't use it terribly, I do think it could have been used a bit better. It also doesn't help that the humor is very hit and miss. While there are plenty of great jokes(most of which come from both Ron and Barney's grandmother, Donka(voiced by Olivia Colman, who speaking of which, also starred in another major animated film earlier this year that had technology being a major focus, that being The Mitchells vs. The Machines)), there are also more than a few jokes that sadly fall flat, with a fairly large emphasis on unfunny poop jokes later on in the film being a huge example. The film also has some huge pacing issues at points, with the third act for example(which I won't discuss at all because of spoiler reasons) going on for much longer than it needed to be.

However, these flaws thankfully don't stop Ron's Gone Wrong from being an overall decent film. While the story, pacing, and some of the humor isn't all that good, I do think the film's heart and message definitely is. Not only is Barney and Ron's friendship well handled, but I also really liked the sub plot where Barney tries to befriend a young girl who goes to his school named Savannah(voiced by Kylie Cantrall), which I felt was very sweet too. And I also felt that the film's message of making friends and bonding with one another was really well executed, and I felt that the film's handling of how we use social media to communicate with one another was great too. The animation was also quite great too. Handled by famed visual effects studio DNEG(who is best known for being Christopher Nolan's go to visual effects studio, as well as handling the effects for films such as the Harry Potter films, the 007 films starting with Die Another Day, several MCU films, and Dune, to name just a few), the character animation is well done and sometimes very energetic, the effects and motion graphics used on the B-Bots and the Bubble headquarters look fantastic, and the backgrounds are very well done too. Not to mention that the character designs(especially on the B-Bots, I really want to have one of those!) look great too. And the characters are really likable too. Barney is a solid lead, and while he isn't perfect, I do think his sympathetic traits was what made him a protagonist that I was able to root for. Ron was without a doubt my favorite character in the entire film, and not only does almost everything he does in the film were just so cute, adorable, and funny, but Zach Galafanakis really does a splendid job of voicing him. And while the rest of the characters(including Barney's father, Graham(voiced by Ed Helms), Donka, Savannah, the bully turned friend Rich(voiced by Richardo Hurtardo), and Bubble CEO Marc(voiced by Justice Smith) aren't as important to the plot as Barney and Ron are, they all do have their moments to shine, and were still solid characters as well. The last thing I will note is that Henry Jackman's score is just fantastic. Jackman has become one of my favorite modern day film composers, and his score for Ron's Gone Wrong, which uses his usual blend of electronic and orchestral sounds, thankfully doesn't disappoint, and really fits this film so well.

Ron's Gone Wrong is not exactly a film that fully succeeds at what it does, but when it does something well, it really ends up doing something well, and still has a lot to appreciate. Locksmith is a studio that definitely has a long and big future, and I am very excited to see what they put out next.