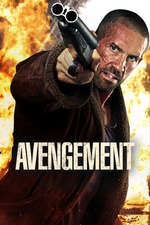 
A step in the right direction for both Scott Adkins and Jesse V Johnson after the almost unwatchable, Triple Threat.

Scott Adkins goes bananas on some motherfuckers. He punches, punches some more and punches like he’s playing Mike Tyson’s Punch-Out!! He’s a one man brawling machine. If he could fight himself, and fight Boyka, I honestly don’t know who would be the undisputed champ. Fans of Mr Adkins should be pleased with Avengement. I believe this is Mr Adkins at his most brutal. The violence in this flick alone is worth the price of admission.

I’m impressed with director, Jesse V Johnson. His screenplay is pretty decent. We have a nonlinear narrative, set mostly in one location, and explained with a lot of flashbacks. In a way, it is too complex for an action b-movie. But, for the most part, it makes sense. Also, we have a smooth synth-pop score and an impressive as fuck final battle.

As with a lot of other Adkins movies, the supporting cast is a bunch of jobbers. We have a couple of familiar faces, but no one else brings the heat to their acting performance. I love the short runtime, but the movie also packs in perhaps a bit too much backstory to go along with its badassary. Despite my criticisms, I’m happy as hell with this flick. Fans of Scott Adkins listen up: We have a winner in Avengement!

All the Devil's Men