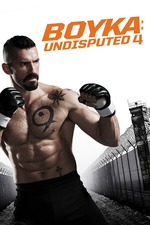 Boyka and Rocky both contain five letters. Is that a coincidence?

If you're a fan of Scott Adkins, I hope you've seen him in action as Boyka in the Undisputed sequels. He's gone from prison house baddie, to God fearing face hero, but he is a straight up badass. I still can't figure out why Scott isn't getting the big Hollywood hero roles. They're finally using him, but mostly in second-rate villainous henchmen parts. Wake up and get woke up Hollywood on the awesomeness that is Scott fuckin' Adkins.

Of course, the plot of the latest chapter in the life of Boyka is clichéd. How many times can a fighter try to make right after they accidentally kill someone in the ring? It is a rinse-and-repeat plot I see over and over again in action movies involving using your feet or fists to hurt someone, but I do think it is cool that Boaz Davidson wrote the story. He seems to bring the best out of Scott.

The fighting is lights out. Scott is a strong puncher and kicker, and no one working today can do the roundhouse kick quite like Scott. I love how the final boss looks menacing as fuck. If I had a complaint about the previous Undisputed film, it was the weak final boss. All of Scott's fights look good. The budget might be on a shoestring, but the fight choreography looks like a million bucks.

The Undisputed franchise needs to change its name to Boyka, because that's who these movies are now all about. This is Scott Adkins at his most comfortable, and fans shouldn't be disappointed. I was super-hyped for this one, so I knew it probably wouldn't live up to what I expected, but it is still a kick ass movie. A must watch for fans of Scott "The British Ninja Warrior" Adkins!