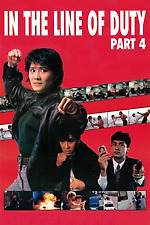 In the Line of Duty 4

In the Line of Duty IV is loaded with almost non-stop action. We don’t have a lot of melodrama that usually occurs in films similar to this. What we do have is Donnie Yen kicking a lot of ass, while chasing a fugitive from Seattle to Hong Kong.

Cynthia Khan is no Michelle Yeoh, but she does do a lot of her own stunts. However, there are some scenes that definitely are not her. A lot of throws and backwards shots are not her, but some random stunt person in a wig.

Where I faulted the original In the Line of Duty for having Michael Wong as a goodie good guy, this time, he isn’t such a do gooder, and I enjoyed him a lot more. His stunt double will make you laugh, because they don’t even pretend it is Michael.

My greatest discovery from watching is the awesome as hell, Michael Woods. He’s such a badass fighter. Think Steve James with bigger muscles, mixed with the agility of Michael Jai White. He has an excellent final boss battle with Donnie, and practically his entire movie career was spent in Hong Kong, fighting Donnie Yen in some of Donnie’s early roles. Look him up.

If you’re a Donnie fan, or just a fan of awesome action, In the Line of Duty IV is definitely a movie for you.