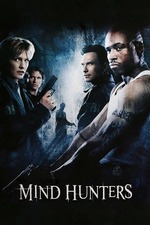 What starts as a training exercise, soon becomes a most dangerous game for a group of FBI profilers. Each character's strength is also their biggest weakness, and this fatal flaw could be their downfall, or even their death.

"Critics" give Renny Harlin a hard time. I can't say much for his later work, but he's made some very entertaining movies in his career. Cliffhanger, Deep Blue Sea and The Long Kiss Goodnight stand out. He's an action making machine, and Mindhunters is another fun example of his "entertaining" work. I also like movies that mashup genres. In this case we have an action, suspense, who done it, slasher and horror remix.

I like the fact you don't have a clue who will live or die. No character is safe. Renny proves this very early into the film. With a cast featuring Christian Slater, Not So Fat Val Kilmer, Jonny Lee Miller, Clifton Collins Jr, a few actors I haven't seen in too many other movies, scene stealing LL Cool J and Kathryn Morris; Midhhunters is a complex game of cat and mouse web of deception, and we as the audience are locked in for the thrilling ride.

If it wasn't for the fall-flat-on-your-face final act, Mindhunters would easily be one of my favorite movies of all time. The final act is laugh-out-loud ludicrous, and you're left with a sour taste in your mouth. However, the first two acts have a fascinating twist and turn plot, cool likable characters and cooler gruesome deaths. LL Cool J might be the raddest of red herrings in recent memory, and the practical effects have an old school vibe that brings a huge smile to my face. Oh, what could've been!