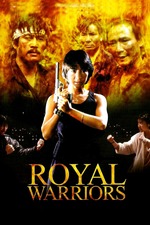 Royal Warriors aka In the Line of Duty could easily be a near perfect action movie if it wasn’t for Michael Wong. He’s so annoying as Michelle Yeoh’s potential love interest. I prefer early roles from Michael when he’s playing the bad guy. This is the Hong Kong sap. You know, the melodrama that goes with the action. I watch these types of films for the action, not the soap opera-esque drama.

Enough criticism. Michelle Yeoh brings the Tiger. She can fight, punch and kick as well as almost any other martial artist. She carries the movie on her back, and she kicks a lot of ass.

The badass is my homeboy, Hiroyuki Sanada. His role is a little bit limited, but he can fight like a boss. I love the shootout at the restaurant, the airplane scene and the final battle. Hiroyuki and Michelle make a great team.

The plot involves these four guys who are like mafia war buddy blood brothers or something like that. Our heroes take a couple of them out on an airplane, and the rest of the movie involves the other two going after Michelle, Michael and Hiroyuki. The movie is awesome, even with the sappiness.

Action movie aficionados: Check it out on Amazon Video.