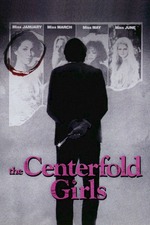 A vivacious nurse, a voluptuous fashion model, and a vibrant flight attendant all have three things in common. One, the ladies are very attractive. Two, each has been featured nude in a Playboy-esque calendar. Three, one by one, they're hunted down by a sadistic serial killer who wants to teach them to stop being naughty. Will your favorite calendar girl make it out alive? The Centerfold Girls has it all. A crazed killer, nudity galore, cool blood, a high body count, and an out of this world musical score. It's a must see for any slasher enthusiast.

We know who the killer is from the start. There's no hiding the fact creepy looking Andrew Prine is the killer. Mr. Prine might be a shorter and distant cousin of Phantasm's Tall Man; based on his look, voice, and his walk. He's everything menacing a killer not wearing a mask can be. However, it's still cool to see a rad PoV shot, and there's a very nice scene featuring the camera looking up on Mr. Prine, as he opens a door. Plus, never trust a fella who wears surgical gloves around town for no apparent reason.

I'm pretty sure director, John Peyser, and writer, Arthur Marks, love nude women on film. If there's a way, someone will get naked. Pajamas? Who needs them? Everyone sleeps naked. You keep hearing a noise at night; so why not keep getting out of bed nude to check it out? Spill something on your shirt? No problem. Just take it off in front of the mirror. Gotta go somewhere in a hurry? Why not get undressed in front of your roommate. Wanna call your movie The Centerfold Girls? Well, you better have a nude photoshoot. At a party and you want to have some fun? Then make out nude with the fella with a suave mustache in the hot tub. Had a long day? Steamy shower time! Want to be more than just another pretty face in Los Angeles? Sleep with the sleazy producer guy. I think to keep the film on budget; the filmmakers decided to omit the use of undergarments. (Gotta save money somehow.)

Why is The Centerfold Girls so much fun? It borrows a page from Alfred Hitchcock's Pyscho, by going all Marion Crane. (Think Drew Barrymore in Scream as well.) There's a smart doggie, an accidental innocent killing an innocent, Charles Manson's doppelgänger; complete with a family of his own. One of the best baddies in the business, Aldo Ray, plays a role you would expect Aldo Ray to play. The killer, drives a station wagon, like he's Michael Myers. My favorite part takes place in a house on an island. It's freaky scary fun. Perhaps the most memorable aspect is the musical score. Think 70's funk meets 70's EuroSleaze meets Goblin meets Grateful Dead. Hell yeah, that's how you do a score.

We never learn why all ladies posed for the calendar. However, each has a cool storyline, and I must give them props for their wonderful acting skills. The killer has a habit of being in the right place at the right time a little bit too consistently. We kinda know why the killer is doing what he's doing, but it's not explained in detail. Maybe, there's a couple of plot holes too, but nothing to take away from my viewing experience. With its giallo vibe, groovy jazzy funky musical score, and it's ode to past, as well as how influential this flick is on modern day horror, The Centerfold Girls is a much watch for all fans of smart doggies, cool music, and iconic slashers.