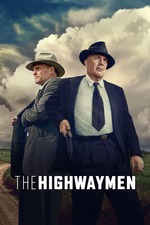 All I need in this life of sin


Realism. The aspect John Lee Hancock’s The Highwaymen achieves with excellence. The height of the Great Depression, the look of dread on the faces of the most depressed, the amount of poverty, the lack of work, the lack of hope and pigs named Porky. No wonder, a couple of criminals, became not only notorious, but folk heroes. What else was there to live for? Why not cheer for the couple, who’s taking it to the man?

This isn’t  your typical Bonnie and Clyde story. It is in the BCU. (Bonnie & Clyde Universe) However, this is a lawman story, with next to zero B & C screentime. The focus is directly on Kevin Costner and Woody Harrelson. The law. The retired Texas Rangers. They make a solid duo, thanks mainly to their natural acting talent.

The Highwaymen has a haunting musical score from a multiple Academy Award nominee, a screenplay from the fella who wrote Young Guns and a director, who directs a lot of movies similar to this one. It sounds great on paper, but there’s not a lot of rewatch ability. This is a slowburn, that might just burn a bit too slow. In all honesty, the best shot of the film, is a brief glimpse of Bonnie with a shotgun. I wanted Bonnie & Clyde, not Frank & Maney.