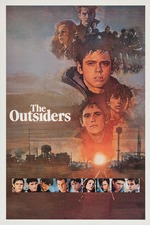 Does anyone else watch Francis Ford Coppola’s The Outsiders and wonder what if Patrick Swayze in mid-sentence while practicing tough love on C. Thomas Howell starts a ballet dance, Rob Lowe while crying, competes in a sock hop and Tom Cruise jumps on cars and does gymnastics over fences? Well, Tom’s actions aren’t dreams, they happen, but the others are just dreams in my head. However, it is the unpredictable tone of The Outsiders that makes me feel like it will go musical, at any minute. It never does, but imagine if it did?

Carmine Coppola’s musical score is a mix of something you would hear in a ‘60s beach movie starring Annette Funicello and the Japanese New Wave scores you find in films such as Koreyoshi Kurahara’s The Warped Ones. It is frantic. Just like the pace of some of the scenes in the film. Add the music from Stevie Wonder, David Allan Coe, Elvis and Van Morrison; and you have yourself an eclectic mix of music.

Although, The Outsiders is campy and corny at times, it does feature coming of age social themes such as: Rich vs Poor, Privilege vs Non-Privilege, Kids who will probably get drafted and maybe die in Vietnam vs Kids who will have infinite deferrals and never have to worry about ambushes in the jungle and Wrong Side of the Tracks vs Right Side. I do like the optimistic outcome the movie tries to present at the end, but we all know, most of the characters, will end up with the short stick in the game of life.

Think for a second about our lead, C. Thomas Howell’s Ponyboy. For me, a Ponyboy is the nickname of a 7oz bottle of beer. Add in the fact Ponyboy’s older brother has the name, Sodapop, and it is a safe bet his dad had some drinking issues. It is almost a miracle that oldest brother, Darrel, isn’t named Miller Genuine Draft Curtis.

The Outsiders features a Who’s Who awesome ‘80s cast. My favorites are Matt Dillion, Rob Lowe, Diane Lane, Emilio Estevez, and maybe the heart and soul of the film, Ralph Macchio. It also sneaks in cameos from macho men William Smith and Tom Waits. I watched the Complete Novel version, and I’m still debating with myself over which version is the superior one. Far from Coppola’s best work, but still a must viewing experience for anyone interested in the coming of age of the average greaser from the wrong part of town.