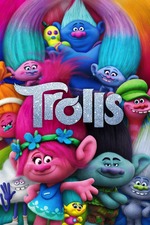 They sing. They dance. They hug. They scrapbook? They're trolls, and if you eat one, you will be happy. Yummy! Yummy!!

In all honesty, Trolls reminds me of a 90 minute episode of American Idol with a Cinderella theme. Most of the music is very karaoke-esque. You know the tunes, so you're humming along to the beat.

Trolls is proof  throwback equals cash money. Find an old school toy from the 80s and make a movie. Trolls isn't a mega blockbuster. But, it will turn a nice profit with its global box office total. Who's ready for Big Wheel or Lite-Brite the movie?

I think there's a plot. I laughed at the super macho fat blue troll with a puppet as a sidekick, the Auto-Tune talking troll, the slimy foreign accent troll, the teeth on the Cannibalistic baddies, the glitter balls that shoot out of the trolls, stories about a dead grandma and gratuitous troll nudity.

Maybe the animation looks better in 3D? This isn't PIXAR, but I don't think they even tried to make it look like eye candy.

There's a message of hope in Trolls. In a world where fake news dominates the internet and friendships are over based on a vote, Trolls makes us all come together with an outstanding musical performance of True Colors by Justin Timberlake and Anna Kendrick. Please judge someone based on their "true" self, not one action out of millions.

It's hard to rate Trolls. I'm pretty sure this is a movie for people who want a Hatchimal for Christmas. However, I had a big smile on my face, and there's nothing quite like a little bit of dancing and signing to brighten your internal or external rainy day.