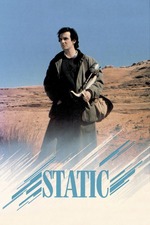 A flawless example of what independent film is all about.

Nowadays it seems indie festivals are the chic thing and filmmakers are trying too hard to get the status that winners of those "prestige" events get. If they would only look back to 1985 to a film like Static, they could learn a thing or two.

This film paces itself, and while never snappy, it uses its time wisely. While a melancholy mood prevales, we still are affected in many ways by the different characters we are introduced to.

The story is quite simple: A young man, not quite over the death of his parents, uses his skills as an inventor to come up with a device that may or may not monitor images of heaven. Through the interaction of several eccentric yet not exaggerated characters, they (and we) learn lessons about hope, desperation, and acceptance.

The film's use of desert landscape adds a lot to the feeling of loneliness (instead of film economics), the careful selection of songs for the soundtrack actually ties in with each scene--from songs by The The to Elvis! Keith Gordon obviously had a hand in that part, as with his choice of songs for his next film The Chocolate War. Goes to show you don't have to look for trendiness or a hit soundtrack to sell, which can date a film and make it lose its power over the years. Static was made in 1985 and hasn't lost an ounce of effectiveness.

There are so many little nuances that will have you hooked, from Ernie's collection of defective crucifixes to Ernie asking Julia why she kissed him: "'Cause you're a strange boy ...I wish I was more like you," it's brilliant. I've seen this film many times and it still has the power to hit me emotionally without fail every single time. I always have a really good cry when I see Amanda Plummer's last smile as she's driving.

Admittedly, films are a form of escapism and all don't have to be made exclusively for intellectual reasons, but when you want a story to touch you without trying to impress you with flavor-of-the-month stars and no "serious" documentary all ready to go for air on the Bravo network, this is the film to seek out. Static is a flawless example of what an independent film is all about.

After all these years, this is the one film that I cherish most and everyone I've suggested it to has admitted it stays in their minds. Without any dialogue to sum it up, the film's final lingering shot along with Amanda Plummer's thoughtful expression says so much more about feelings than any other film ever could!

An afterthought (2017): The fact that Romanek has basically disowned this film, calling it a "piece of juvenalia" as his first effort, makes me want to say he's being a pompous ass. One Hour Photo, while a decent enough film, was not as affecting as Static. Plus, giving away the ending of One Hour Photo right at the BEGINNING ruins the suspense, since we already know how it will turn out. Him wanting to call that his legitimate first feature is a huge mistake -- STATIC is much more important and meaningful.