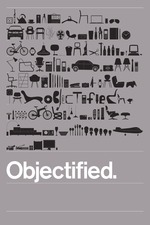 While Objectified can offer some insights into the design process and many of its issues it grapples with in the contemporary world, the documentary fundamentally fails to say anything substantive on our relationship to objects beyond effete stoner-tier gestures acknowledging consumerism, with absent critique.

I find the narrative stated by some of those interviewed "good design is something with as little design as possible", or that design is leading us to an inevitability of linear progression towards a primal definitive understanding (which the film opens the first 20 minutes with), to be extremely toxic to fully understanding the ramifications of design. The stance says to me that the speaker fundamentally isn't questioning their ideological positions. The notion that the way things are progressing is necessarily forward, and the form in which objects feel good is the inherent good, is pure ideology.

It's ironic that this documentary upholds Apple in this respect, with a clear disconnect of understanding that who designed the product vs who made it are two very different entities. As is apparent, this film concerns itself almost entirely with the former (ignoring the latter), and that is its primary failure. Without the additional layer of how design is permeated by commodification, industrialisation, consumerism, marketing, and mass production, cheap labour, the analysis of such design (outside of accessibility and sustainability) becomes either virtually purely aesthetic for enjoyment or ineffective in systemic change.

The film scratches the surface of these critiques in its final third, however, it seems more often to uphold these structures subconsciously. The designers interviewed frequently fall into the trap of individualism, of becoming a success, of leaving their imprint. It's a mentality that is focused on operating entirely within the paradigm of consumption, with innovation being restricted to new versions of the same things. Fundamentally, to functionally challenge norms and actually construct something radically different, you will either be ignored, ogled at as a gimmick, or recuperated for mass production.