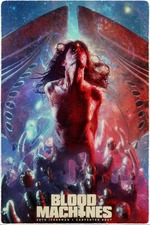 I didn't even know anything about this film going in and ended up having the time of my life.

The premise: men use up machines until they break and then throw them into the trash. Some think machines have souls. Once liberated, these machines morph back into their true form - women.

At one point, characters are navigating through an intergalactic scrapyard - one of them, a man, says "what a load of fucking trash". A women responds "this is not a scrapyard, it's a cemetery".

Being directed by a dude, some might think this isn't as personal as it should be. I agree, but I think that it is, at its core, one of the most high-octane, batshit crazy films of the year - not since Fury Road have we gotten such high energy infused with feminist power.

The most important message: women might be beaten down, but they always get back up. And they kick ass. They triumph in the end

Not to mention that Blood Machines is absolutely gorgeous. One of the best looking effects in recent memory. I don't know whether or not this was actually shot on film, but it emulates the Grindhouse look.

The short that precedes it is mind-blowingly awesome. This film's action sequences go into full music video mode, but it looks amazing on a giant cinema screen.