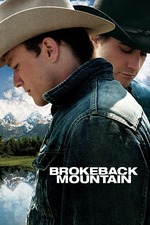 Just to put things into perspective for my readers, this film, Good Night and Good Luck, Capote and Munich were all nominated for Best Picture, and were all beat out by Crash which wasn’t nominated at any other major awards show. It hurts, doesn’t it? Especially because depending on who you ask, Brokeback Mountain is one of the best most acclaimed films of the century so far. But I don’t want to dwell too long on that, let’s just acknowledge the film at hand. Brokeback Mountain is...quite good. Quite damn good. I wouldn’t call it one of the best films of that decade; the year maybe, but I get it. In a year full of thoughtful, adult dramas about real issues, it’s still refreshing to see one about the gays. (I appropriate “The Gays” because I identify as a queer person, I’m not just pulling it out of my ass, I promise.) Even though, you know, part of me can’t help but resent it perhaps popularizing or even starting the idea that movies about the LGBT community have to be dramas where something tragic happens. I get the sentiment, I do, and it certainly wasn’t enough for me to dock too many points from the final score, but it’s still something I noticed.

And at any rate, in terms of raw filmmaking, I think Brokeback Mountain is a spectacle and damn should have won the Oscar. Maybe. I don’t know, we’ll see after I watch more movies from that year. What I know for sure is Ang Lee knows how to direct a damn movie. I had already seen Life of Pi, which I...think I prefer to this film just by a hair? I’m not sure, I’ll have to revisit it some time soon if I want to back up that statement. If only because Ang Lee directed that film like a bat out of hell, up to and including the beautiful effects. Brokeback Mountain is significantly more laid back, not reaching for grandiose moments, all of that good stuff. It’s a character piece, and I love a good character piece. Is it as strong as it could have been? You know, maybe not. I would have loved more scenes between the two in the mountains rather than how those moments affected their home lives, that might add to the melodrama I mentioned earlier, but it’s still a worthy attempt and I’m not going to lie and pretend I feel otherwise. If nothing else (I say sarcastically of course, considering how much I’ve praised about the film so far), Jake Gyllenhaal and Heath Ledger are outstanding and provide performances that I would have loved to follow for hours upon hours. Oh yeah, and this film goes by surprisingly quick, in a good way. Maybe that adds to it.