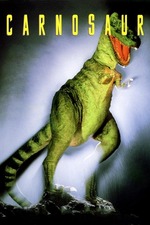 I used to have all of these movies on VHS and I was at my library this weekend and found parts 2 and 3 so I borrowed them for old times sake and luckily I was able to find this one on the Tube. I mean, a Roger Corman produced Jurassic Park rip-off with Alien vibes and tons of terrible animatronic dinosaur action and miniature sets? There’s not a chance in hell I didn’t love this then and I still love it now! There’s even a scene where some military dudes shoot up a room full of people and they’re all obviously mannequins except the one guy who opens the door and walks in to get shot. Truly Terrible? Budgetary Brilliance? I love it either way!

Diane Ladd is glorious as the unhinged scientist who will do literally anything to protect her new species, including inseminate herself with dino spooge! There’s also a nice amount of gore and the Carnosaur’s mouth is consistently covered in blood as if he’s had a fresh kill every other minute…and it’s actually quite possible given that old boy pops up any and everywhere no matter how far it is between locations.

Where is the deluxe treatment for these forgotten gems and better yet, where is the remake?!!