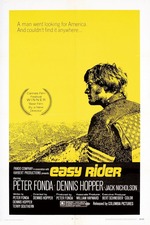 Phew.. This movie greatly exceeded my non-existent expectations. Obviously, I've heard a bit of context about where 'Easy Rider' sits in the lore of cinema, but I knew very little about the story telling at play. On account of my lack of exposure, I was pleasantly surprised to have this movie rock my world.

I don't know what year the term 'Americana' was coined, but I can't find a word that describes this film more accurately. If Americana existed in the sixties and seventies, it manifested itself in the form of 'Easy Rider'. Everything displayed here reeks of the era in the most delightful way: the cinematography, the vocabulary, the body language, the decision-making, the relationships, all of it. I'm sure there are plenty of films that take an OK stab at defining the sixties, but I'm not holding my breath for anything to outdo 'Easy Rider', because this one does it all.

The performances in this film are very sound from top to bottom, but the standout for me and the one I'd like to touch on is Jack Nicholson as George Hanson. I would love to know who Jack channeled to create the character of George, because the nuances of the person he brings to life on the screen are mesmerizing. George's verbose nature and his Tourrette's-esque ticking make for one incredibly watchable personality, not to mention the brief monologues on who-knows-what topics are some rabbit holes I never knew I needed to jump into.

My favorite part about this film is the meandering and often times directionless plot. In less capable hands, this movie would fall apart because the destinations, interactions, and emotional beats are ungrounded in such an otherwise obscure story arc. But with Peter Fonda's navigation, the narrative of 'Easy Rider' comes to life in a wonderfully opportunistic way. The people are real, their trials come and go, and their development is everything.

I'm not saying, I'm just saying... If you didn't like this movie, smoke something green and give it another go. It ALL comes together.