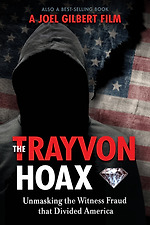 The Trayvon Hoax: Unmasking the Witness Fraud that Divided America 2019 ★

It ultimately doesn’t feel like this is saying anything revelatory about modern American political discourse—that is, unless you count “black people are expected to vote democrat and the liberal media exploits tragedies for political gain (an act so mutually exclusive that no conservative news source would ever do such a thing)”. Absolutely astounding how much of THE TRAYVON HOAX is just b-roll of Gilbert figuring out how to use his computer, reading urban dictionary so that he can finally become fluent enough in African American slang to understand the subjects of his documentary, or literary just documenting his travels from place to place (there have to be at least six shots of JG’s view from his airplane window alone in this). As much as I can see someone getting as much enjoyment out of this I did purely from a perspective of laughing at distastefulness and incompetence (highlights: the animation quality of the ‘trayvon hoax’ bit, seeing our narrator put on his black voice to relay our subjects tweets to the audience, handwriting expert saying a woman with a learning disability clearly had a ‘disorganized mind‘,
hearing a white dude in his 50s read out the n-word multiple times, backing the bits about Martin’s friends and family with hip hop instrumentals, and so on), but if you aren’t watching this with a group of buds or just don’t feel like spending two hours seeing a grown man desperately attempt to convince you that it was the witness fraud that divided America rather than the controversial killing of a minority, then this might not be the doc for you. If what I’ve just described does sound like a good time however, load this baby up on Youtube and go nuts. Godspeed.