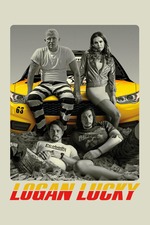 Something about the tone of this had me really worried initially—much of it to do with the thick Southern accents that all the principal cast put on, which are a challenge not to laugh at and had me questioning what mood the film was ultimately aiming for (Adam Driver’s, in particular, just sounds all kinds of wrong). But just when I thought the film was making the wrong call to play everything dead straight, Seth MacFarlane showed up sporting the most ridiculous moustache and one of the shoddiest “British” accents I have ever heard in a mainstream movie—and at this point, I breathed a huge sigh of relief, fully realising that the film was asking me to take absolutely nothing I was about to see remotely seriously.

Of course, from this point onwards, the goofs and the gags and the blunders came in pretty steady supply, but not from the source I was necessarily expecting (NOTE I do spoil the ultimate end point of the narrative after this point). Everything about the way Soderbergh sets up this heist comedy suggests to us that our blue-collar, provincial West Virginian protagonists are going to fail; and I suspect the choice to make them speak in a slow Southern drawl was very much intended to colour the audience’s preconceptions—that these people are nothing but unsophisticated country bumpkins; not mastermind criminals. It’s certainly an unhealthy stereotype of the South that Hollywood has tried to hammer home over the years, so it was great to see Soderbergh subvert our expectations so smartly in this way. If there’s one message this film truly conveys, it’s to not judge a book by its cover—a great message if you ask me, and something that only solidified my enjoyment of the experience.

Coming from a director who knows his way around a heist movie, it’s no real surprise to find that this one is a complete blast to watch. I mean, who doesn’t love watching a meticulously orchestrated heist getting carried out to the letter? There’s nothing all that flash or special about how any of it is executed—Soderbergh himself boiled down its premise to being the “anti-glam Ocean’s movie”; all “rubber-band technology” without any of the frills or usual extravagances. That, to me, is just about the perfect way to sum this one up. Put in the simplest terms: it’s got a great sense of humour, and it’s a really fun ride—and sometimes, that’s all you could possibly want from a movie.