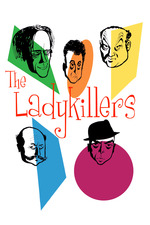 Another winning effort from Ealing Studios and the directorial hand of Alexander Mackendrick that is simply a delight to watch. It’s the simplest of setups: a sweet and gentle old lady named Mrs Wilberforce, living alone in a lopsided home overlooking King’s Cross station, finds herself embroiled in the shady goings on of a group of hardened criminals, who have hatched a plan to rob a security van nearby. Having agreed to rent out one of her rooms to the men, who are masquerading as an amateur string quintet in need of rehearsal space, Mrs Wilberforce initially seems blissfully unaware of their ulterior motives, only for the truth of the situation to gradually become known to her. It’s clear that the five men concerned completely underestimate their host, believing her to be nothing but a naive and doddery old fool; but of course, we the audience see otherwise—that her frail figure and innocent personality belies a mind that is as sharp and alert as it has ever been; and so, as this gang of thieves soon find out to their peril, it becomes clear she is someone not to be reckoned with!

It’s a wonderfully uncomplicated premise that is executed quite brilliantly, with oodles of wit and charm to spare. The film’s key strengths are William Rose’s punchy script, which rolls out the quips and the gags at breakneck pace, and the absolutely impeccable roster of character actors who make up the central cast. The quintet of criminals each have their distinct qualities: ringleader Professor Marcus (Alec Guinness) is a hunched, Nosferatu-like creep with huge teeth implants, who is equal parts sinister and unctuous; Major Courtney is a terribly well-mannered gentleman who seems altogether far too honest and principled to be cut out for his line of work; Louis Harvey is a mean-looking, ruthless gangster who has absolutely no scruples; Harry Robinson (played quite brilliantly by Peter Sellers) is a twitchy Cockney spiv, who is quick to panic and gets easily spooked; and ex-boxer “One-Round” Lawson is a lumbering but sweet-mannered simpleton, who has his heart set straight but his mind askew. And of course, giving as good as she gets—and then some—is Mrs Wilberforce herself, played by the then 76-year-old Katie Johnson. She is the very embodiment of the kindly old British grandmother—one that many will immediately recognise and relate to—yet at the same time she also acts as the perfect foil in the criminals’ plans: irritating them with unwanted interruptions, frustrating their progress with long-winded questions and tea breaks, and generally just putting herself in places the men least want her to be.

It’s another perfect example of what the Ealing Comedies did so well: high-concept, low-budget ideas, executed with real class and verve.