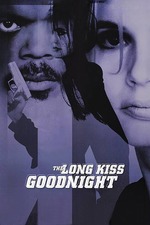 “So you’re assumin’ I won’t shoot your sorry ass! And everyone knows, when you make an assumption, you make an ass outta you… and umption”.
—Mitch Henessey

If asked to pick out notable “amnesiac action movies”, you might naturally think of Total Recall or The Bourne Identity, but years before the latter mined the whole “action hero with memory loss piecing together the mysteries of their past” shtick that set off a franchise and a whole string of copycats, there was a little talked about movie called The Long Kiss Goodnight—which, despite enjoying the benefits of a Shane Black penned script, a stellar cast, and generally positive reviews, performed surprisingly badly at the box office and has since struggled to attract the viewers or recognition it deserves. Some, including Shane Black himself, wondered whether the film’s failure to draw audiences stemmed from it having a female lead; even though by this point Geena Davis was very much a household name and a hugely popular screen presence. Director Renny Harlin blamed it all on bad marketing, which may or may not have been true, but he completely failed to take into account just what a catastrophe his previous collaboration with Davis, 1995’s Cutthroat Island, had been (it completely tanked). Even coming off such successes as Die Hard 2 and Cliffhanger didn’t seem to be enough to bolster viewer’s expectations or confidence in Harlin’s abilities as a filmmaker, it seems.

I only wish I could travel back to October ’96 to slap some sense into cinemagoers, because they really missed out on an absolute treat here. It may not be a game-changing entry in the pantheon of action movies, or spy thrillers for that matter, but any shortcomings it might have regarding the particulars of its madcap narrative (which in many ways are only added positives) are more than made up for by its frenetic pacing, chaotic action and gunfights, quick-quipping characters, and Geena Davis absolutely proving her mettle as one of the hardest women in 90s Hollywood. Watching Charly Baltimore crack a thug’s skull open with nothing but a bowl of lemon meringue pie is evidence enough, if you ask me. She certainly gives Sarah Connor and Trinity a run for their money.

What’s more, it’s another Christmas Action movie to enter into the annual holiday cycle alongside Die Hard and Lethal Weapon. To me that's a very appealing triple bill.