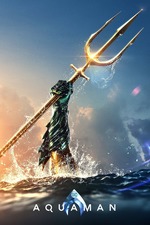 There's a lot about Aquaman that wouldn't have ever been possible in the past. Creating a world of underwater people (and making it believable) is a filmmaking feat, but ultimately Aquaman left me underwhelmed.

The dialogue in much of this film feels unnatural and stiff. A movie like this requires a lot of exposition to explain the Atlantean mythos, and unfortunately it's painfully obvious in many scenes. Instead of establishing the Atlantean people, their politics, and beliefs as serious stakes, the poorly written dialogue makes much of it feel straight out of a badly written children's book. Sadly, Aquaman is full of fantastic actors who did their best with what they were given.

The score is all over the place. Some moments have a beautiful sweeping orchestra, and others have jarring electronic music. More confusingly, some scenes are scored with songs that don't mesh with the tone of the film. Even a Pitbull song makes an appearance, which made me wonder if we were in 2010 all over again.

The story is also bogged down by a big CGI monster fight, which involves thousands of creatures that you've been given zero reasons to care about. Unfortunately, this is a trap that many superhero films fall into, having huge action set pieces without any thought of how they contribute to the narrative. In fairness, the work done to make these creatures come to life is amazing, but a waste.

It's not all bad though. The costumes are pretty great, and seeing Aquaman in his traditional outfit is a satisfying moment. Black Manta's suit (as ridiculous as it might seem to some) is straight out of the comics.

This film also nailed the mechanics of being underwater. I don't know how they did it. The way the hair flows, the sound of voices, and the body movements make you believe this is all happening in the ocean, instead of in front of some green screen on a sound stage. That is unimaginably hard, and I'd assume one of the biggest reasons we've never seen a live-action adaptation of Aquaman until now.

The Black Manta storyline is a highlight. Arthur's decision regarding the character is clearly wrong, and the realization of his mistake set up this classic rivalry perfectly.

In the end however, Aquaman is a disappointing film that doesn't do justice to the rich source material. Regrettably, it'll leave most people thinking the character is just as lame as popular media has made him out to be.