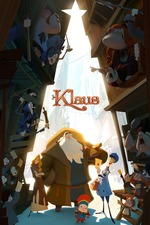 By virtue of being a part film business - as a filmmaker, member of the audience, critic, actor, or otherwise - one has to inadvertently open up to judgment. Sometimes, scathing! 'That film's plot was too simplistic'!, 'That film had the worst music I had heard in years!', The cinematography was great, but the direction fell flat', 'How can you be fond of Nolan after watching Tarkovsky?' 'How do you consider mainstream films as works of art?'.

In all these statements and many more - in an attempt to validate our love for films - we forget the most basic intention of a film - its intention to be non-judgemental. Its ability to be a safe space. Its motive to impart joy. Its mandate to let you have fun!

Klaus, is exactly that for me. A safe space. A film that reminds you that in the simple pleasures of life, lies its true joy. In the simple motions of storytelling, lies its greatest capabilities. From a plot for all ages to its ability to truly transport you, to the pain it invokes in its deepest points, Klaus is what you call a 'Perfect film'. Perfect not in the sense of judgment of art, but perfect in the sense of playing with the imperfections of life and coming out triumphant.

If not anything, watch it as a celebration of simple pleasures. Watch it as a memoir of joy - a safe, non-judgemental memoir that tells its story with all heart and gumption!