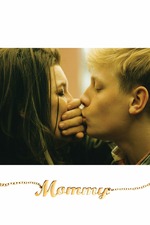 Mommy is the type of movie which is desperately trying to make you love it. Usually a movie like this wouldn't land cause I have a cynical streak to me that makes me shut off whenever I'm watching something excessively sweet and sentimental. I'm aware of how whatever I'm watching is trying to affect me and I instinctively reject it and refuse to be moved by the movie. That happened a lot during Mommy. I actually think the first two acts are quite mediocre. They're too obvious and they don't hold anything back.

The movie desperately wants you to fall in love with the central mother-son duo. I never quite did. I was somewhat compelled by them and I was definitely empathetic to their situation, but I was still constantly on guard because I was constantly aware of what the movie was trying to do to me. I need subtlety in a story like this, I need a story like this to not be as obvious as it is.

The 1:1 gimmick is the perfect example of how uninterested the movie is in trying to keep anything secret from you. The director described the decision as him simply wanting the viewer to focus on the characters and not be worried by anything surrounding them. The viewers have described it as a perfectly claustrophobic tool which takes us into the mind of Simon signifying when he's happy and when he's angry. This again was precisely my problem. These emotions were so telegraphed because of the aspect ratio changing that I couldn't help, but feel like the movie was smacking me in the head with what it was trying to do. The movie could have captured the same effect simply by signifying the differences in moods with close ups and wide shots. This way the change wouldn't have been nearly as telegraphed and obvious as it was in here.

The acting is consistently amazing from beginning to end. Antoine is electrifying as Simon and clearly stands out the most from the main three, but Anne Dorval is equally as amazing as his mother. She completely embodies the flawed mother who deeply loves her son, but also doesn't know how to handle him. At times she unintentionally provokes him to the point of rage filled fits, which clearly shows how out of her depth she is with him. Suzanne Clément plays the neighbor who becomes Simon's teacher. We never find out a whole a lot about her character, but she nevertheless convinces with her performance, providing a little calmer energy to complement to the more extravagant mother and son.

While the first two acts failed to make me fall in love with the movie and its central cast, the third lack landed perfectly. Unlike the desperate first two acts, the third act felt comfortable in believing the viewer was completely in love with the family, that it could lay bare and deliver its explosive climax. That climax was the most genuine and honest part of the entire movie and I loved every bit of it. No longer was I shut off inside cause the movie felt manipulative in its effort to affect me, instead I was open and receptive to it.