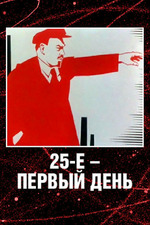 „Atmospheric propaganda - the successful start of a great career.”
(The Two Cineasts)

Hi everybody, Yuri Norstein's directorial debut, just like his next couple of earlier works (especially The Battle of Kerzhenets), is very different from what has brought him international wide recognition, masterpieces such as Tale of Tales or Hedgehog in the Fog.

After working on Soviet Cartoon series, the assistant animator got the chance to direct 25 October, the First Day together with Arkadiy Tyurin, a propaganda piece with an obvious Communist ideology. The 8 minutes care to present how the Bolshevik uprising changed everything for the better and that things were finally good after the revolution. However one may look at this specific topic, Norstein is one of the greatest animators I've ever encountered and his drawings and editing are top notch and absolutely impressive for the first directorial effort.

Grey masses and the red comes as the savior in the form of Lenin accompanied by a heroic score and swelling emotion… in one way or another. Overlapping contemporary art with 2-dimensional cut-out paper like figures create a very special atmosphere and more than interesting view for every fan of the variety only animation can offer. Still pieces are set in motion, huge shadows are cast above the streets and tell us the story of a nation, most of the time wordless. Even news-reel footage of that time is used.

The subject and political context prevents 25 October, the First Day to be a timeless classic like Yorstein's later works, however for fans of the great animator it's fascinating to watch his beginnings and growth over the years and history buffs can catapult themselves with this time capsule right into the events of the Russian Revolution.