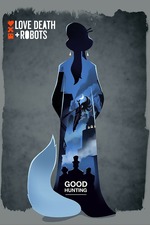 Hi everybody, how would a hybrid of a Ghibliesque animation style and themes in a steampunk environment sound for you? Just like the characters themselves are half human and animal spirits we get to see the collision and fusion of two different worlds, the humans with their technology on the one side and the nature and its inhabitants. The shape shifters make it clear whose side is winning (with their transformation) as there has to be two sides... a coexisting would be too fantastical. The Asian spiritualism mixed with the indictment of globalization and therefore suppression of other life forms is very reminiscent of "Princess Mononoke" especially the bloody clash of the new rulers and the "pests" and the so called "development." "The men who perpetrate evil but call it progress" disrupt the connection of the magical beings and thus threatens their living space and worse, there mere existence... . "Good Hunting wasn't predictable or clichéd and of all the episodes of the first season this one takes the biggest steps and the most "progress".

Progress doesn't mean to let something die in the world and this episode is definitely the most emotionally gripping of the series. In the 17 minutes we were totally immersed in the story and over this short period of time we learned to love the characters. We are big fans of alternate history stories and so this episode caught us just because of its unique look of a futuristic past. Furthermore, the political and socio-cultural allusions to the colonial rule of the British in China were well presented and accurate. But above everything is the characterization, which in this fantastic story can be understood as an allegorical allusion to the progress and the associated loss of cultural identification. Four thumbs up for one of the best episodes in the entire anthology series.

Basically it's Cat Woman who does some pretty "haunting" practices for "Joker" scars in here.