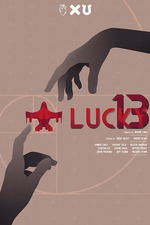 Hi everybody, this is the story about your faithful pilot and her/his ship in basically every shooter or RPG like "Mass Effect" or more fitting from the scenerio, "Deus Ex". Sometimes you can talk with them or get even loyalty missions, sometimes they're just faceless puppets like in the "XCOM" series yet important parts in the gameplay and story because you couldn't move one bit without your ship. "Lucky 13" showed that these figures and above all the machines have in fact a soul, way better than for example LDR: Three Robots with actual talking and emphasizing robots. This ship, the 13, appears to have more soul just with a few little tricks.

This episode is a prime example of a successful short film, even though you don't learn anything about the background of the story, you are immediately cast under its spell. We have already mentioned several times that a short film is successful when you wish to learn more about the story. Same here, too, I would love to know what war is being fought there and against whom the war is being waged or about the previous two missions of the "13". The optics are amazing, the war machines are not really too sci-fi and you could well imagine that the stories take place on earth and in the present day. The similarity to the first person shooter "Halo" is particularly striking, both the uniforms and the spaceships show great references to the game.

The short has on top the best choreographed action in the series making it one of our favorites. Especially the the first major action sequence on the beginning were out of competition. The thrilling spaceship pursuit and the perfect geography of the planet, makes this whole part to an absolutely eye opener. The most normal episode that shows impressively that explicit violence and sexual content don't have to define the story and are no need for a great entry.