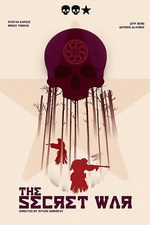 Hi everybody, this was one of our favorite episodes of the first season, probably because it feels to be the most complete one of all the shorts. We definitely want to see more, just like with every other unique work before, but "The Secret War" doesn't tease us for a more complex world as it firstly appeared like in "Suits", it provides the visual implementation to David W. Amendola's fantasy horror tale "Secret War" a closed story. The story builds up slowly but the bang at the end is even louder.

This short film is the perfect example of a genre hybrid. World war film meets creature feature meets horror film. With one of the longest running times, this episode manages to cast its spell very well in our opinion. The boundaries between dramaturgical heroic moments and badass shootouts merge into an entertaining adventure film that I would have loved to watch for another 90 or 120 minutes. The ultra realistic animations also give a brief glimpse of what a feature movie might look like. This episode is undoubtedly one of our all-time favorites.

The hyperrealistic CGI let you immediately jump in something that seems to be a cinematic sequence of "Uncharted 1" with the graphics of a "Red Dead Redemption 2" and the story of "Wolfenstein" meets the gory "Doom". As gamers we felt several times the motion to grab the controller again because now it's time to control the characters. We are known to be big fans of Russian/ Soviet cinema, as you can see from our list of this film culture or our diary entries. So we would have been really happy to see this episode in Russian language with English subtitles.